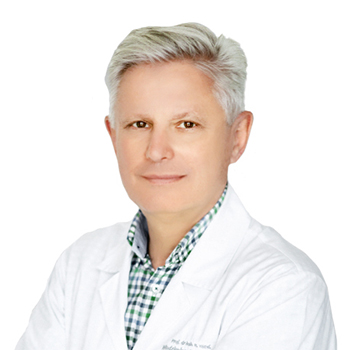 More about this doctor:

Graduate of the Medicine Faculty at the Medical University in Lublin. He specializes in the field of obstetrics and gynecology as well as oncological gynecology. Professor Baranowski is the head of the Surgical Gynecology Department at the 1st Department of Gynecology and Obstetrics at the Medical University of Warsaw. He is also a consultant at the Gynecology and Oncological Gynecology Department of the Military Medical Institute. During his professional career he has written over 200 academic works and conference reports. What is more, he was awarded four times by the Minister of Health for his scientific activity. For many years he was the chairman of the Basic Sciences Section and the Urogynecology Section of the Polish Gynecological Society. The editor-in-chief of the magazine for gynecologists-obstetricians "Gynecology after Diploma”. Professor also belongs to editorial boards of various medical editorial offices. In his professional work, he draws a lot of attention to gynecological oncology, gynecological endoscopy, urogynecology, gynecological endocrinology as well as fertility disorders.