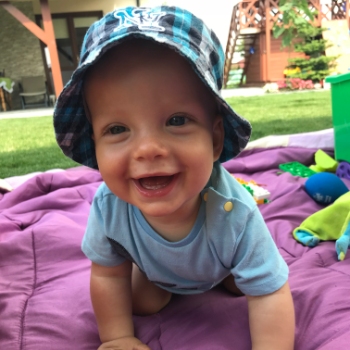 The day of our dreams

We are parents, thanks to your help. That’s probably the greatest happiness that we have encountered. Jaś is going to be 1 year old soon, and Pawełek is 4.

We went to the Klinika Bocian in 2013. Dr Grygoruk became our doctor. After several months of treatment we attempted a transfer, which was performed by Dr Pietrzycki. This was a success, and in June 2014 we became the parents of Pawełek. That was the most wonderful day in our life.

Another stroke of luck came on 28.09.2017. Jaś came to the world a little early, in the 35th week of pregnancy, by caesarean section. This time it was not simple. With a growing placenta praevia, I had to remain in a lying position a lot, which led the doctor to decide on the early delivery by C-section. Jaś was born with congenital pneumonia and a severe anaemia, which required an immediate blood transfusion (1 point on the Apgar scale). We spent long weeks at the hospital where he slowly recovered. After weeks of rehabilitation and consultations with professionals, today there is no sign of premature birth. He is a very active kid.

There are no words that could express our gratitude. With all our hearts, we would like to thank all the staff of the clinic, and in particular Dr Grygoruk, who was always there to help, and Dr Pietrzycki, who helped us have our two miracles.